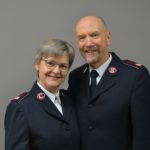 Colonel’s Nielsen have spent eight years in the Eastern Europe Territory and the last five years as Chief Secretary/Territorial Women’s Ministry Secretary before becoming the Territorial Leaders in January 2018. 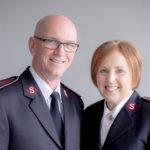 On the 1st July, 2020, the current Chief Secretary and Territorial Women’s Ministry Secretary, Lt Colonels Kelvin & Cheralynne Pethybridge will take up the roles of Territorial Leaders for the Eastern Europe Territory with the rank of Colonel.

Lt. Colonels Pethybridge came to Eastern Europe from the Australian Territory in April 2018. They have been Officers for 37 years and have had a variety of experiences in that time. They been Corps Officers, Divisional Leaders before taking up roles of THQ in the Australia Eastern Territory. Whilst on THQ in Australia, Colonel Kelvin was the Secretary for Business Administration prior to being the Chief in Charge whilst the formation of the Australian Territory took place. In this period Colonel Cheralynne was the Assistant Personnel Secretary before taking up the role of Territorial Secretary for Women’s Ministries.

Lt Colonels Kelvin & Cheralynne have three grown up children who are married and six grandchildren. 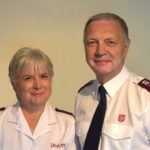 Also on the 1st July, 2020 Majors Ann & Richard Borrett who are currently Divisional Leaders in Scotland will become part of the Eastern Europe Territory. Major Richard will be the Chief Secretary and Major Ann the Territorial Secretary for Women’s Ministries and Personnel Secretary with the rank of Lieutenant Colonel.

Majors Ann & Richard have been married for 34 years and have two children. Hannah will be commissioned an officer this year and Edward works in a Salvation Army Pioneer Church with his wife Sophie.  They have been officers for 27 years and were part of the Heralds of Jesus session.  In that time they have served as COs, Youth Officers and at William Booth College. The past 10 years have seen them in DHQ appointments with responsibility for Evangelism, Candidates and Officer Personnel and then latterly as Divisional Leaders. They state that ‘for many years we have felt God calling us to work outside of the UKI.  Now in his perfect timing we see how the opportunity to serve in EET is an outworking of that calling.

In 2017 we were blessed to spend some time in EET along with other DLs from the UKI.  During one evening with THQ staff in Moldova we both felt a stirring in our hearts that God was saying: “you will be back!” – He was seeing the unseen!  So we are excited to join you soon and hold on to the promise that God is with us and will continue to reveal His will and purpose for EET.’