Guided by their faith and love of God, Salvation Army officers, employees and volunteers in Ukraine are undertaking vital work to help millions of people affected by the conflict with Russia.

Since the war began, frontline workers have provided urgently needed practical and emotional support, delivering essential provisions to people impacted by the worsening situation. Churches are being used as emergency shelters, providing beds for as many people as possible. Volunteers and officers are providing hot meals by train stations, where safe, and at churches where possible. The work of administrative staff such as Ivan Berezkin, 41, is crucial. Ivan is co-ordinating donations and financial transfers so their vital work can continue as long as is necessary.

Ivan celebrated his birthday on the day the war broke out and said most people did not believe it would happen as many people in Ukraine have relatives in Russia.

Ivan was forced to flee his home after the conflict started and relocate to a bomb shelter with only a wooden pallet for a bed. When Russian troops got too close, he and his family left. Ivan believes faith has guided and kept him and his family safe throughout.

He reveals: ‘We were living from siren to siren, so we decided we had to go somewhere safe. My father was ill and running out of medicine, so we had to relocate. A lot of people did the same. We had six people in the car with only basic belongings.

‘Faith helps to overcome depression and fear. My faith gave me strength and confidence. When I decided to evacuate, there was a shortage of petrol so I asked my friends to pray and someone brought me some petrol. The corps officers also spoke to the neighbours, who sold me some fuel.

‘I prayed that we would be able to find accommodation, and we did. The people were nice and cooked a traditional Ukranian soup for our arrival and even brought some shopping for us. We were devastated when one of the men was later killed in a missile attack.

‘I needed a safe place, as frontline personnel are heavily dependent on my work. I arranged my office in a new place as soon as I arrived and continued performing my duties to support workers, volunteers and officers on the front line, helping with their ministry to people.’

In the face of situations most of us will never have to deal with, officers, volunteers and employees have remained determined, inspired and energised to help others, guided by their faith and worship of God.

Ivan explains: ‘Since the beginning of the war, we live in completely different realities. The introduction of martial law in the country has brought many restrictions both in our lives and in the work of Salvationists.

‘What was possible and normal in peacetime can be dangerous now. Therefore, the work of Salvationists, employees and volunteers is planned in such a way as to embody the mission of The Salvation Army while not endangering those who provide assistance or those who receive assistance.

‘We are working in very difficult conditions. Some parts of the country are safe and others are not. For example, we have had to stop operations in Kharkiv because it was coming under constant missile attacks and artillery barrages and it was too dangerous. Churches elsewhere have kept going, even under heavy bombing.’

Ivan, who spent six years living in the UK, says churches in the country are always open to help anyone affected by the war.

He says: ‘Anyone can come to any of the corps to get food, toiletries, tea and coffee and spiritual advice while some have even restarted activities for children and young people. A lot of people are travelling through and we are supporting those who find that they are now refugees. A lot of people have lost their jobs.’ 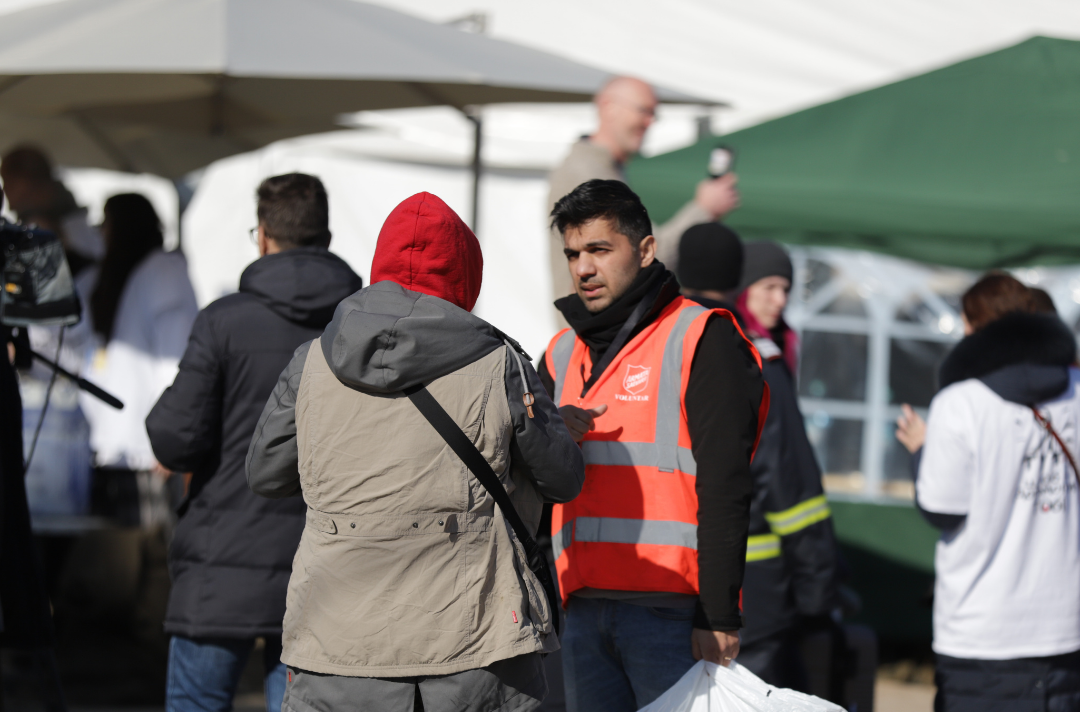 Ivan says anyone can come to The Salvation Army for help and that Salvationists, employees and volunteers have ‘gone above and beyond’

Inevitably, people’s thoughts are turning to the future after the war and Ivan is sure The Salvation Army will have a role to play.

He says: ‘A lot of people have left cities, towns and villages but they will want to come back as it’s not a nice feeling being a refugee or a displaced person. There is a time when they will come back and need support and assistance. Spiritual counselling is also important and The Salvation Army could even look at creating workplaces as many have been destroyed.

‘God and faith help us to be confident, calm and not panic.

‘I hope Ukraine will regain territories.

‘Salvation Army employees, volunteers and officers have gone above and beyond since the war started. They do so not because they were asked to do so but because of their faith and patriotic feelings.

‘Every Ukrainian is working and living to achieve peace and to rebuild a new, beautiful country.’